Referendum date and question to be announced on Friday 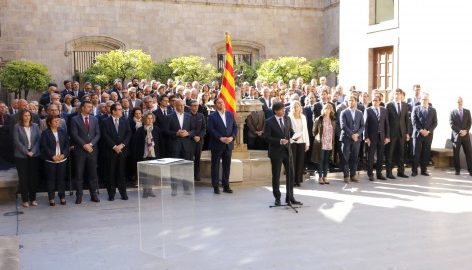 Barcelona (ACN).- The Catalan president, Carles Puigdemont, and the Catalan Government’s vice-president, Oriol Junqueras, will announce the date and the question they have chosen for the Catalan referendum on Friday morning at the Government headquarters in Barcelona. According to different media outlets and subsequently confirmed by ACN, the Catalan president chose to publically announce the decision Friday after discussions with different representatives of the various pro-sovereignty and political groups.

According to sources close to the government, the president and vice-president will be accompanied by the Government’s ministers and MPs of the governing cross-party pro-independence ‘Junts Pel Sí’ and the radical left-wing party ‘CUP’.