Catalonia’s ex-president Puigdemont: I’m not in Belgium to seek asylum

Ousted leader says he would return immediately if a fair judicial process was guaranteed in Spain, where he may face charges including rebellion 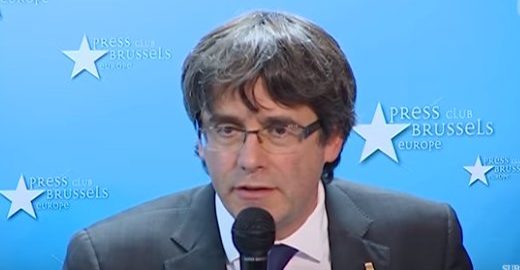 Catalonia’s deposed president, Carles Puigdemont, has said he has no plans to seek political asylum in Belgium, telling a packed press conference in Brussels he would return home immediately if a fair judicial process were guaranteed in Spain.

Puigdemont said he had come to the Belgian capital to seek safety and freedom, and accused Spanish police of failing to protect his rights and those of other separatist leaders.

On Monday, Spain’s attorney general called for charges of rebellion, sedition and misuse of public funds to be brought against him and 13 other separatist leaders. That request showed “a desire, not for justice, but for vengeance”, said Puigdemont, who had made his way to Belgium before the charges were announced.

His appearance, flanked by five of his ousted regional chiefs, marked a further twist in a month-long crisis triggered by an independence referendum in Catalonia on 1 October.

In a possible sign that Madrid has gained the upper hand in the dispute, Puigdemont also said he would accept the results of snap regional elections on 21 December called by the Spanish prime minister, Mariano Rajoy.

Shortly before Puigdemont’s press conference, Spain’s constitutional court announced that it was suspending Friday’s unilateral declaration of independence by the Catalan parliament, while the supreme court said it had begun proceedings against Catalan officials over their role in the referendum. Separately, Spain’s civil guard police force searched the headquarters of Catalonia’s regional police

Speculation that Puigdemont would apply for asylum rose when he appointed Paul Bekaert, a Belgian lawyer specialising in asylum and extradition, on Monday, but Puigdemont ruled out the move when questioned about it by reporters on Tuesday. Asked how long he would stay, Puigdemont responded: “It depends. I need guarantees.”

Friday’s declaration of independence prompted Rajoy to take the unprecedented step of using article 155 of the constitution to sack Puigdemont and his government and impose direct rule.

As well as taking control of the region’s civil service, police and finances, Rajoy has also used the article to call December’s elections in Catalonia.

A Spanish government spokeswoman in Barcelona told reporters that Catalan autonomy had not been suspended, but was “just under new management”.

At a press conference in Barcelona, taking place while Puigdemont was speaking, she said: “We are not here to occupy the administration, but to oversee a return to normality as soon as possible. We intend to have minimal involvement. The transition has been very smooth.”

On Tuesday a spokesman for the Belgian prime minister, Charles Michel, said Puigdemont had not been invited by the Belgian government. “Mr Puigdemont has the same rights and duties as all European citizens, no more, no less,” the spokesman said.

Earlier in the day, Belgium’s deputy prime minister, Kris Peeters, noted tartly: “If you are going to declare independence, you usually stay with your people.”

The Catalan drama threatens to be a headache for Belgium’s government, a four-party coalition of Flemish nationalists, liberals and Christian Democrats that came into office in October 2014 after five months of negotiations.

Belgian politicians are worried about damaging relations with Madrid. Some opposition politicians have accused Michel of failing to discipline the immigration minister, Theo Francken, a leading member of the Flemish separatist N-VA party who appeared to lay down the welcome mat for Puigdemont when he told local media at the weekend: “If the Catalans demand asylum, Belgian law permits it.”

Puigdemont seemed sensitive to the tensions, telling journalists he had had no contact with the N-VA. “This is not a matter of the Belgian politics,” he said. “I am here in Brussels as the capital of Europe.”

The EU has said the Catalan referendum was illegal and that it will only deal with Spain’s central government in Madrid.

Puigdemont said he accepted the challenge of the December elections “with all our strength”, erasing fears that secessionists might boycott the ballot in the hope of denying it legitimacy. Spain wants Catalonia “to abandon our political project, and they won’t achieve it,” he said.

He blamed Madrid for the impasse, pinpointing the start of the crisis to the heavy-handed police response to the referendum he organised in defiance of Spanish law. “The chaos started on 1 October with violence on the Spanish side,” he said.