Puigdemont: "Democracy unites us all beyond our legitimate and healthy discrepancies" 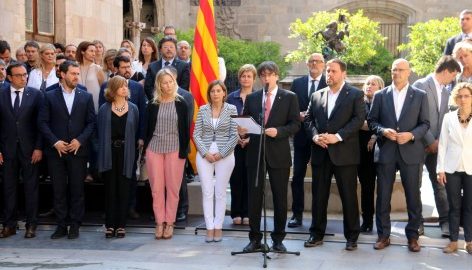 Barcelona (ACN).- The Catalan independence referendum will be held on October 1, 2017, the Catalan President, Carles Puigdemont, said Friday. Citizens will be asked: “Do you want Catalonia to be an independent country in the form of a Republic?” Puigdemont announced the date and question for the referendum flanked by Vice President Oriol Junqueras and the rest of his government. Members of Parliament from both the Junts pel Sí coalition and the radical-left CUP, as well as the President of the chamber, Carme Forcadell, were also in attendance.

The Catalan government said the vote will be organized with “all guarantees” and the result will be implemented, whichever it is. “All options are equally legitimate and valid,” Puigdemont said. “Democracy unites us all beyond our legitimate and healthy discrepancies,” he added.