No s’han trobat resultats per a la teva cerca.

Catalans living in Melbourne, Australia, denounce the violation of civil rights and an array of unprecedented repressive measures in Catalonia

Since the referendum law was passed in the Catalan Parliament on September 6th, Catalonia has witnessed severe judicial and police actions against Catalonia's population and its representatives.

On Wednesday, September 27th, at 6 pm, Catalans have demonstrated under the banner ‘Referendum is Democracy’ to defend democratic rights in Catalonia and denounce the ongoing repressive actions carried out by the Spanish government. The protest has taken place in Federation Square, Melbourne, Australia.

Participants have denounced the violation of civil rights and an array of unprecedented repressive measures in Catalonia, as the Rajoy government attempts to block Catalonia’s referendum on independence scheduled for October 1st.

Since the referendum law was passed in the Catalan Parliament on September 6th, Catalonia has witnessed severe judicial and police actions against Catalonia’s population and its representatives. These include serious infringements of freedoms such as freedom of speech, assembly and press over the last 12 days. On September 20th, the Spanish military police force raided 22 Catalan government buildings, arresting 13 high-ranking government officials. While confiscating referendum material, they seized over 5 million leaflets and posters, performed raids on printing companies, closed government websites, suspended or interrupted conferences in towns and cities (e.g. by ordering power cuts) and handed warnings to newspapers, often following questionable procedures. The Spanish Constitutional Court (Tribunal Constitucional) —a highly politicized Spanish court which was exceptionally given penal powers last November— has in the last few months issued over 1,000 warnings to Catalan officials. More recently, on Sept 13, Spain’s attorney general also ordered an investigation that led to sending summonses of 75% of Catalonia’s elected mayors for answering to their constituencies and committing themselves to enabling the vote on Oct 1. Over 700 mayors responded by denouncing such threats in a demonstration in Barcelona 4 days ago. Last Friday Spanish Finance Minister Montoro also claimed that his ministry would impose financial controls over Catalonia. 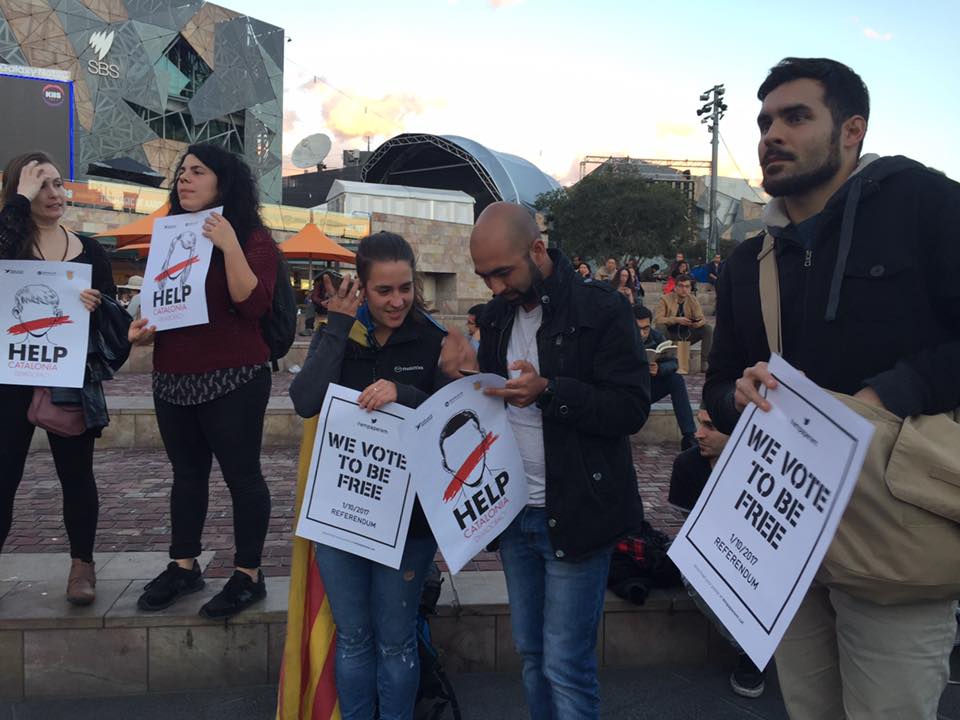 Since 2010 the Spanish government has refused to give Catalonia a serious political answer. After repeatedly and unsuccessfully asking for a referendum to be held (18 times), regional elections were called by the Catalan government two years ago. With a pro-independence majority in the Catalan Parliament since that time, and supported by polls that consistently indicate that 75-80% of the population is in favor of voting on the independence issue, the binding referendum was finally scheduled for October 1st.
Catalan citizens and residents in Australia demand action from the International community to ensure that such a democratic exercise can take place without interference or attacks.